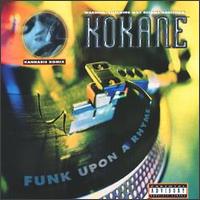 On a beat hunt around town on the weekend Emvee found a copy of Kokane's 'Funk Upon A Rhyme' for $7 at a Cash Converters store, This prompted another 'Battle On Wax' post so I could chuck up my favourite track from this gem, 'Dont Bite The Phunk'. For those not familiar with this track it's another classic Ruthless Dre diss track. As a follow on from Eazy's 'Its On' E.P. This drills Dre pretty hard but gives props to Snoop, which is the only down fall to this mad track. In Kokane's eyes Dre bit his 'Phunk' from their days at Ruthless and considering that Dre is known for getting ghost writers like Jay Z, this would not surprise me one bit.

While we're dissing Dre, I've chucked on 'Cowards In Compton' that I ripped from my 12. The track is by Luke, that although he is a southern hip hop legend and I have nothing but respect for can't rap for shit, which is why he put his artist J.T. Money from Poison Clan to put the skills down on the diss. Dr Dre got a gapped teeth look-a-like to mimic Luke and Eazy in his 'Dre Day' video which is why Luke got pissed. I have heard rumors that after Dre's 'Dre Day' video Dre got run out of Atlanta by Luke and his boys while on the 'Chronic' tour. Although what the rumors are and what actually happened may be to completely different things. Any Tweedy Bird Loc fans that were wondering why he disses Luke in 'Fuck Miami', this is why. 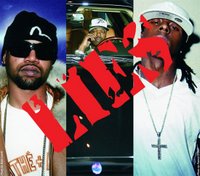 This next track is by the New York outfit 'New Gettie', who appeared on 'Da Wild Boyz - Time For Da Real' compilation that came out in 2000. The track is called 'Click Click' and is aimed straight at Juvenile, Lil' Wayne and B.G. as well as also giving a bit of a diss to the whole 'Cash Money Records' roster. Other than whats said in the track I have no idea what started the beef but is pretty clear that the Cash Money boys dissed New York at some stage. Like I said I know fuck all about this so I'll have to leave it here, but it is a straight diss with no hiding behind hints and metaphors. 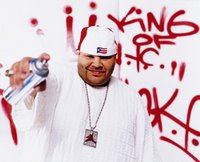 First up, I can't fuckin stand 50 Cent, that said I hate all these fake fuckin diss tracks that are made to make some extra dollars. On DJ Blacks 'Fuck 50' compilation there are 19 tracks all directed to 50, half of them probably don't even have a problem with him. Track 5 is Tupac featuring on a Black Child track dissing 50. I may not be the smartest guy in the world but I'm pretty sure Tupac never had anything to do with 50 Cent. Anyway I put Fat Joe's 'Fuck 50' on there because it's a pretty def track. Not that I have been a Fat Joe fan for the past 10 years or so since his quest for Top 40 fame. 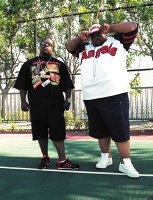 This track is by west coast group 'The Relativez' who used to go under the name 'Young Soldiers' who appeared on the 'Murder Was The Case' soundtrack. They were originally an extention of Tweedy Bird Loc's 'Bloods & Crips'. The track is pretty much a Dre diss with the hook an answer to Dre "I started this gangsta shit, and this is the thanks I get" although they also diss Mack 10, Xzibit and a slight line to a few others. The track itself is pretty sick but as a diss track could have been more focused on their targets. 3 out of 5 of these tracks dissed Dre and I could easily find another 8 or 9, I guess cross dressing fake gangstas are easy targets?

I love that song Cowards In Compton. It never gets old. Nice 12" Remix of this track. BTW are you trying to set a racord from most times talk about Tweedy Bird Loc in a blog? Cause I think you already have done it. lol!
Its all good, I love hearing about him every otther post it makes me laugh.

Kokane song is a good diss, but it is one the long side.

I like the beat for This Is The Thanks You Get and they had some good lines in it, but you are right. It's not very focused.

haha, I don't know about mentioning every second post, but I do like bringing up dope rappers that seem to never get mentioned anywhere else.

I know you're down with that Tweedy shit too.

Well yeah you don't bring him up that much I hyped it up. Someones got to talk about, no one else dose.

BTW, you were right. You told me that you like "Fuck Compton" just as much as "Fuck the South Bronx" I said I liked it, but not as much as Tim Dog's diss. Well, it is now safe to say I like them both just as much. No dought, they are my two favorite diss tracks. 3rd place would have to go to Ice Cube, "No Vasillane.

cheers cowards in compoton is real good and just to let you know the battle on wax a while back with tony d dissin 3rd bass comes up as camron disses to jay-z.

Yeah JT Money makes that Cowards In Compton as dope as it is.

sorry i meant the whole volume not just the tony d one but i've downloaded it twice and theese tracks come up-
camron-u gotta love it
camron-swagger jacker
camron-interview(dissing jay-z)
camron-miss joneshot97
camron-oh what a night(wich is one of the gayest songs of heard in years)
it could just b my computer?

That's some weird shit, I've never even heard those tracks.

I'll download it myself and let you know when I get a chance.