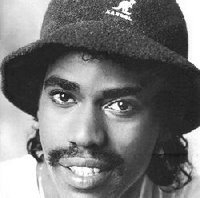 With the world cup just days away I thought I'd chuck up a post on various artists showing love to their favourite sport. Hip hop and sport have had a connection since the early days.The oldest hip hop track on sports is 'Basketball'' by Hurt 'Em Bad in 1982 followed by the classic 'Basketball' by Kurtis Blow back in 1984. Back when they released their tracks and even when the Ultra Magnetic MC's dropped 'NBA Allstars' it was all for the love of the music and giving respect to their favourite players.

Although now with hip hop being hijacked by the major corporations and all the big brands like Nike, Adidas and Reebok bringing out high top basketball sneakers for alot of the major commercial rappers the love is gone and the dollar signs get the love. This is one of the main reasons why top 40 pop music that the majors try to disguise as 'hip hop' sucks dick and why real independent hip hop will live on way after 50 and Ja appear on Celebrity Squares.

Basketball would have to be the most mentioned sport in the hip hop industry. Ever since the

Fu Shnickens released that track with Shaq in about '93 half of the NBA think they can rap. Founder of No Limit Records, Master P who has dabbled in acting also started 'No Limit Sports' which was a sports agency and had plenty of NBA players on their books. He has also tried out with the Charlotte Hornets but was cut, he then went to the Toronto Raptors but was cut before the season started, you have to admire his determination. Plenty of rappers have dedicated tracks to ballers or teams like the Sir Mix-A-Lot track he did for the Seattle Supersonics back in the Shawn Kemp days or the E-40 track dedicated to to Rasheed Wallace 'Record Haterz' (although the latter with a slightly different angle). Even the NBA All Star Weekend is more like a huge block party with rappers from all over the country invited every year. 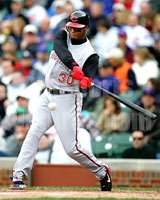 V & Legacy's 'Baseball' and Sir Mix-A-Lot's 'Batter Up' are two of only a few baseball tracks that come to mind along with the classic track by Seattle's Kid Sensation hooking up with legendary Baseball star, Ken Griffey Jr and releasing 'The Way I Swing' on Nastymix' 'The Power Of Rhyme' album that came out in '92. I also heard that Ken Griffey recorded a track with Oakland's MC Hammer, I've never heard the track personally but apparently it's out there somewhere.


NFL players have had a bit to do with the 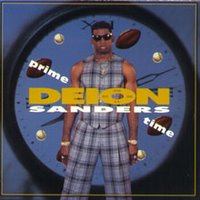 scene with plenty of players like Deion Sanders who released 'Prime Time' in '95 and Ricky Watters releasing records. A few years back an album even got released called 'NFL Jams' that was a compilation filled with player/rapper combo's. Atlanta's Andre Risen even let MC Breed shoot a video in his house with Risen featued in the video. Fellow Michigan MC, Esham's dedication to his Red Wings ice hockey team under his alter ego 'Hockey Daddy' was another mad sports track that comes to mind.

Other than a few cliche quotes of 'I kick it like Pele' that come around every now and then my favorite sport, Football (soccer) never has (as far as I can remember) had anything to do with hip hop other than Turkish player, Umit Davala releasing an album. That was until U.S.A. player Clint Dempsey hooked up H.A.W.K. who recently passed away and released the Nike pre-WC06 promotional track 'Don't Tread', first I was a bit wary of this thinking it was another marketing ploy of a couple of guys pimped out in the latest Nike attire but once I seen it I was impressed. H.A.W.K. proudly sporting his R.I.P. Fat Pat shirt and Dempsey displaying a mad flow showing that if his football career comes to a sudden holt, he has a rap career he can fall back on.

Rap-A-Lot Records until WWE president Vince McMahon stopped the deal going ahead. Also,apparently there's a wrestler that comes down the isle to Q Strange's 'Strange Land'. While I'm mentioning wrestling I feel obliged to bring up Macho Man Randy Savage's comical hip hop album 'Be A Man'. I can remember hearing U.K. group Phi Life Cypher dedicating a track to Evander Holyfield and a celebrity boxing competition over a decade ago where the Terrorists Dope E was matched up against Tim Dog but for some reason Tim Dog didn't fight and Dope E went against Freddy Fox and Willie D knocked out Melle Mel which is the reason for the "ask melle Mel about my boxing game" line on 'Unbreakable'. Lil' J now has his own boxing management agency which is home to such talent as Roy Jones Jr., Floyd Mayweather and Ahmed Kaddour (who you may remember from 'The Contender').

Obviously this post could have gone on forever and I've missed out on countless tracks that could have fit this topic, but this is what I came up with.

sup bwoys, i've just found your blogspot because i was lookin for C.O.D. info and found this site. i see you got that "Cummin' Out Doggin" vinyl which i'm lookin for [seen your review]. i suppose there's no opportunity to buy one from you ;) so i'll ask you if there is any possibility that you could rip this vinyl [in let's say 192kbps or VBR quality] ?? there is one rip on the net but the quality of this one is sooo poor. what's more the fifth track is almost completly damaged. if there is such a possibility please contact me @ my email: zinarts@interia.pl or write here, i'll be checkin this blogspot

big up from Poland!

What album is that UM MC's Allstars song from?

Hey, I got that Goin' Out Lika Soldier album by Willie D Thanks fro telling me about it.

I posted it at my blog http://www.xanga.com/FunkyPimp

Do you have that song by MC Choice Big Payback? I'd love to hear it to give me some background on that diss track.

First up, that Ultra track is from 'Smack My Bitch Up'.

Your site looks good, i'll add your link soon. I had been meaning to do it for a while now, I noticed in your Willie D post you mentioned about James Brown... It was actually Rap-A-Lot Records James "Lil' J" Smith that D is talking about.

As for the Choice track, I don't have it but a friend does, i'll post it up in a couple of weeks with some other diss tracks.

Thanks for the support, PEACE.

Sorry Pimp, I borrowed that Choice cd but it's the '92 album 'Stick N Moove' and that trracks from her first album, so I can't chuck it up at the moment but i'll track it down and put it up.